It’s official, the useful idiots on the Left and never-Trumper clan have simply lost their damned minds. The American eagle on your money is now deemed a cancelable object because President Trump’s campaign store put an eagle on a tee-shirt that they claim, if you squint your eyes and look a thousand yards out there somewhere there’s a Nazi symbol.

To repeat: They’re now making an attempt to dirty-up or cancel the American eagle symbol that you see on your money.

Don’t roll your eyes and click away. Stick with me because things get hilarious from here.

And USA Today is happy to go along with the troll.

The so-called fact-checker at the publication, Will Peebles, reports that Twitter trolls, Facebook users, and “The Lincoln Project” have contrived a story that a Trump campaign shirt is a Nazi symbol.

The similarity was first noticed, according to Forward, by two Twitter accounts, Bend the Arc: Jewish Action, described as a Jewish progressive group, and the Lincoln Project, an anti-Trump group formed by Republicans.

“The President of the United States is campaigning for reelection with a Nazi symbol. Again,” Bend the Arc tweeted on July 1.

That’s right, the best-friend-Israel-ever-had-in-the-Oval-Office-since-Harry-Truman has now morphed from being a Russian secret agent to being a damned Nazi using a symbol that’s “is common in American politics” and is on your money.

As USA Today reported above, the anti-Trump group, “The Lincoln Project” and Lefties, including anti-Israel groups “first noticed” the Trump tee-shirt similarity to a Nazi symbol.

If it sounds like antifa did this fact check it’s because one of the sources used in this Babylon Bee-worthy report is literally an antifa supporter from Dallas, Texas who USA Today quotes: “Trump is now selling straight up nazi propaganda shirts. So that’s cool.”

The one Facebook user the paper cited is under the name “Skye Weatheread.“

She put a side-by-side photo of a reported Nazi symbol with the Trump tee-shirt, worn by a person of color no less, and said they matched. 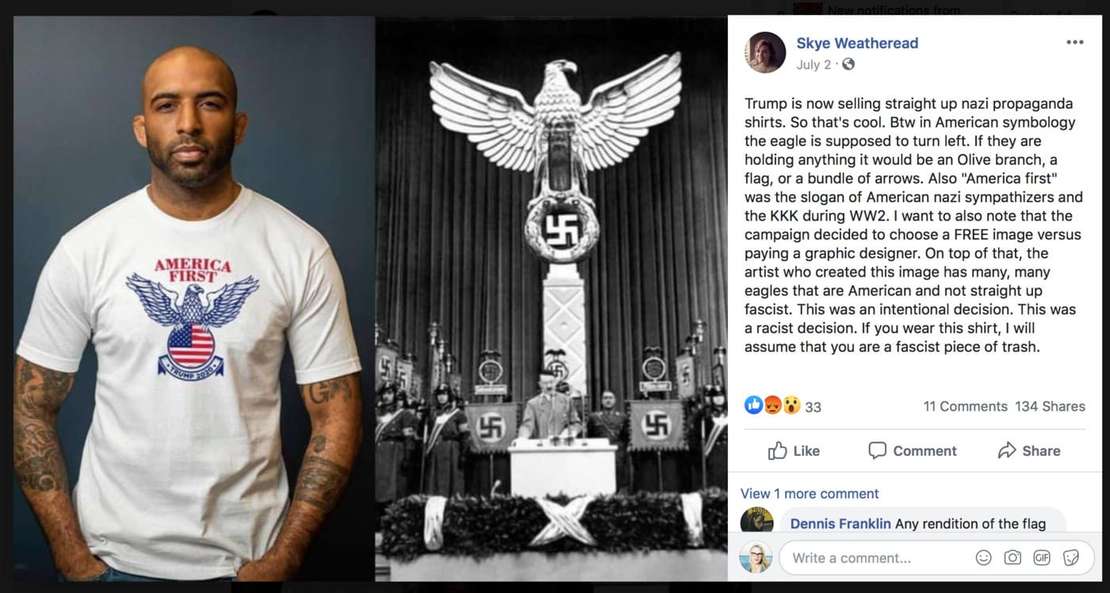 The above was posted July 2nd and had eleven comments and more than 100 shares.

On July 9th, “Skye” posted “support our troops” with fist emojis. Those appear to be antifa terrorists in the photo she posted. 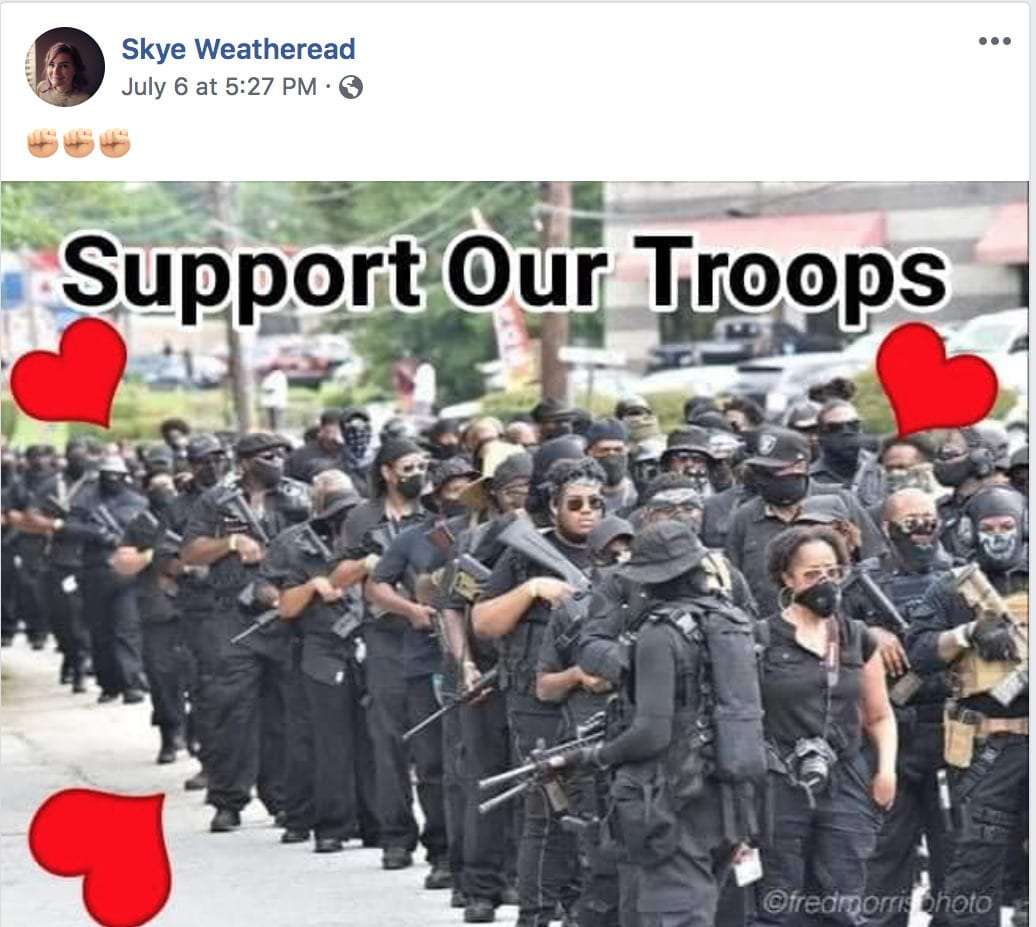 The piece also named the far Left, Marxist supporting group, “Bend the Arc: Jewish Action” which shows photos of its members on the streets with Black Lives Matter and antifa rioters.

But wait, there’s more! The newspaper claimed that these sources and eagle symbology used in American symbols on practically everything mean that it’s farcical “fact” check is TRUE?! Yes.

The claims that a Trump campaign T-shirt has come under criticism for using a symbol similar to a Nazi eagle is TRUE, based on our research. But it is worth noting that the eagle is a common symbol in American politics, and is included in the presidential seal of the U.S., as well as many federal departments.

And look what the so-called “fact” checker did there. Peebles smeared the Trump team and then “fact” checked this question: “claims that a Trump campaign t-shirt has come under criticism … is true.”

They didn’t check whether Trump’s t-shirt was a Nazi symbol because that’s INSANE, but only whether there was criticism of the symbol. This is so dishonest it’s gasp-inducing. It’s moronic. Pull that guy’s reporter card.

Trump 2020 Communications Director Tim Murtaugh spoke for millions of Americans when he told USA Today: “This is moronic. In Democrats’ America, Mount Rushmore glorifies white supremacy and the bald eagle with an American flag is a Nazi symbol. They have lost their minds.”

Fun fact: The United States of America adopted the bald eagle as its national bird in 1792, the same year the young country first put eagles on its money. That’s quite a few years before the Nazis rose to power — and the allies led by the United States crushed them.

Finally, let USA Today know your thoughts and then you might want to get yourself one of these bad boys.

Portland Rioters Surround Car and Driver Shoots His Way Out