Teacher’s unions have always struck me as an insane institution. As with any public union, they bargain with the taxpayer, which is a ridiculous setup. Excluding public employees from unionizing may be the only thing Franklin Delano Roosevelt and I agreed on. However, when a teacher’s union makes political demands on a community to even consider resuming their work, that becomes unconscionable. The United Teachers of Los Angeles (UTLA) is the poster child for this level of extortion.

The UTLA issued a report with a list of demands to return to teaching in the Los Angeles United School District in the fall. It is full of critical social justice gobbledygook and requirements that have nothing to do with keeping children, teachers, or staff safe.

CDC Director Robert Redfield has agreed with other professional medical organizations, such as the American Academy of Pediatrics, that the health risks to children from COVID-19 are much lower than the risks of keeping children out of school:

Redfield went on to say that this could be done safely and effectively in partnership with local school districts. Globally, the data supports even fewer restrictions than the CDC is recommending. Denmark, the Netherlands, Australia, Canada, Iceland, and Germany have allowed students to return to school, free from social distancing and masking requirements.

They made these decisions because globally, the incidence of children passing COVID-19 to adults or to each other is effectively zero. This fact has been demonstrated through genetic analysis of the virus and robust contact tracing. None of these countries has seen a cluster emerge related to attendance at school.

These facts alone destroy most of the UTLA arguments. The union spends a lot of time discussing the fact its school population comes from multigenerational homes. If children don’t transmit the virus, this is a moot point. A German study concludes that children act as a brake on transmission, according to a translation of the article. That provides one reason Germans will have no restrictions when children return in August.

The spread of the corona virus in kindergartens, schools and families has apparently been overestimated. A study by the Medical Faculty of the Technical University of Dresden, for which more than 2,000 schoolchildren and teachers have been tested for antibodies since the reopening of schools in Saxony in the spring, did not provide any evidence that the virus spreads particularly quickly in schools, nor does it prove so that it is transmitted particularly often by children. “It is rather the opposite,” said study director Reinhard Berner, director of the polyclinic for children and adolescent medicine at the Dresden University Hospital. “Children act more like a brake on the infection. Not every infection that reaches them is passed on.”

Despite the scientific evidence to the contrary, the UTLA is demanding the following:

With an over 55% response rate from UTLA members, the UTLA Safe and Equitable Schools survey showed that over 85% of members said that the following safety measures were “critically important” or “very important” for them to feel that it is safe and appropriate to return to schools:

? Widespread testing of students and employees

? A rigorous tracing procedure for anyone in close contact with someone who tests positive

? Reduced class sizes to keep students six feet away from each other

The only scientifically supported items on this list are testing of staff, some PPE for staff, and unique accommodations for the high-risk staff and children. Right now, the teachers want mass screening before a return to school and testing of children and staff weekly. For children, weekly testing, along with requiring PPE, is ridiculous and unrealistic. The LAUT knows this.

Then we get to what the leaders of this extortion unit are after: more money and political outcomes. From the federal government, they demand the following:

From the state, they demand the following:

And finally, from the city, which is the only body they have any leverage to bargain with, LAUT demands the almost purely political items from a radical left agenda:

These people are insane and have no business being in a position to influence children. The social justice warriors in the UTLA have likely never asked their students’ families about how they feel about defunding the police. They have certainly not asked a charter school parent why he or she chooses to send his or her child elsewhere. These are the political goals of the teacher’s union. They have nothing to do with COVID-19 or effectively educating children.

Quite a smorgasbord for a group that turns in results like this for 8th graders: 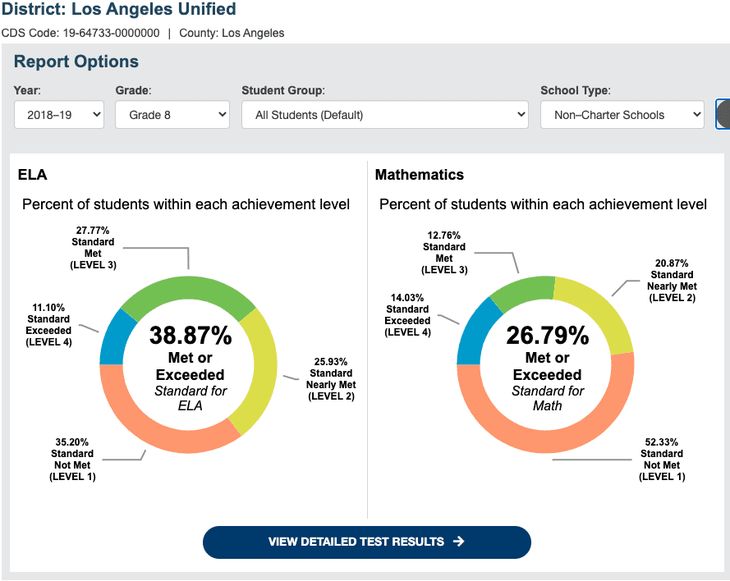 The UTLA needs to spend a whole lot less time on activism and a whole lot more time on the basics. Neither the city nor the taxpayers are getting anything for their money at this point. Why should a federal, state, or local government, let alone a taxpayer, give anything more for these kinds of dismal results?

Homeschooling During Coronavirus? Here Are Resources for Parents Left in the Lurch