Let’s be clear about this up front: I absolutely love New York City. Or I usually do. My first real comedy manager was in New York. I was already a headliner by the time I got there so I’ve always had more fun doing stand-up there even though I was based in Los Angeles for most of my adult life. I have a lot of friends there. My daughter went to school there.

Sadly, like my beloved Los Angeles, New York has been ruined by unhinged progressive governance.

Welcome, my friends, to another chapter of “Liberals Ruin Everything.”

How Bill de Blasio is a two-term mayor there may be one of the most mystifying occurrences in the history of American politics. Talk to any New Yorker — Republican, Democrat, Ferret Party — and they all hate de Blasio.

Liberal media bias wasn’t the only reason New York’s idiot governor Andrew Cuomo was being praised in the early days of the COVID plague, it was mostly because he is from the same state as de Blasio and looked positively brilliant by comparison.

De Blasio is turning what many believe to be the greatest city on the planet into a Third World hell hole almost overnight. It is truly disheartening even if you aren’t typically a fan of the Big Apple.

Since all of the “peaceful protests” began de Blasio has been crapping all over his police force at every opportunity. NYPD officers are retiring in droves, prompting the city to put a daily limit on how many retirement applications they will accept.

Despite the fact the the violence in New York City is escalating, de Blasio plowed ahead with his efforts to slash the NYPD budget and replace cops with community activists. It’s not working, by the way.

Not to worry, BdB does have some priorities:

Hizzoner even joined the peaceful protesters to help paint that.

I know that people are fond of complaining about Twitter, but it is the best almost real-time news source available online and it does provide perfect snapshots of the news at times. On Tuesday, these two tweets showed up in succession in a Tweetdeck column I use to monitor various big city news sources: 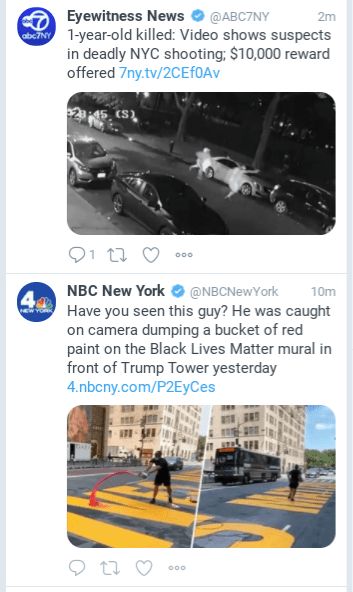 De Blasio had already publicly assured everyone that the red paint had been removed at the expense of the New York City taxpayers. One would have thought that this was the most pressing problem facing him and his city if one were only to pay attention to him.

OK, I’ll say it: the red paint on the BLM “street art” is a far more disturbing problem to de Blasio than any of the people being killed in New York City right now. Yes, even the 1-year-old baby.

Progressives are hideous, purely political animals who are always so fascism-adjacent that they don’t care if there is a body count when advancing an agenda. It’s almost as if they have a collateral damage fetish.

Bill de Blasio has greatly endangered the lives of civilians and law enforcement personnel in New York by his actions. He has blood on his hands and will have a lot more before any semblance of sanity is restored to the city.

Kruiser Twitter
Kruiser Facebook
PJ Media Senior Columnist and Associate Editor Stephen Kruiser is the author of “Don’t Let the Hippies Shower” and “Straight Outta Feelings: Political Zen in the Age of Outrage,” both of which address serious subjects in a humorous way. Monday through Friday he edits PJ Media’s “Morning Briefing.” His columns appear twice a week.