Hydroxychloroquine (HCQ) — the controversial COVID-19 treatment touted by President Donald Trump — might be gaining new traction in the fight against the Wuhan coronavirus.

The latest positive results come from Vadodara, India, where city officials have conducted a major study involving more than 300,000 people, including “health workers and other frontline staff.”

Local health official Dr. Devesh Patel told the paper, “It has shown positive results. We have the numbers and not one person has complained of complications. The only side effect reported is mild gastritis, which is common with administering heavy medicines and can be effectively handled.”

In other words, anyone who has taken the much more common azithromycin antibiotic for a simple sinus infection has probably suffered about the same distress — all gastric — as a subject of the Vadodara study.

Dr. Mohammad Hussain, who runs Vadodara’s Faith Hospital, told the Express, “There are conflicting studies about the use of HCQ. While initially the US studies rejected it and cited side-effects, European countries backed its prophylactic use. In Vadodara, it has shown positive results. We have been able to restrict cases in clusters. Nagarwada no longer has a huge number of cases.”

Hussain reiterated that no serious side effects were reported.

While HCQ is no miracle cure, the evidence continues to mount that the drug is a safe and effective treatment or prophylactic measure against COVID-19.

Also on Friday, Retraction Watch reported that The Lancet, the prestigious Britsh medical journal — had quietly retracted and replaced an anti-HCQ editorial by Christian Funck-Brentano it had published in May. 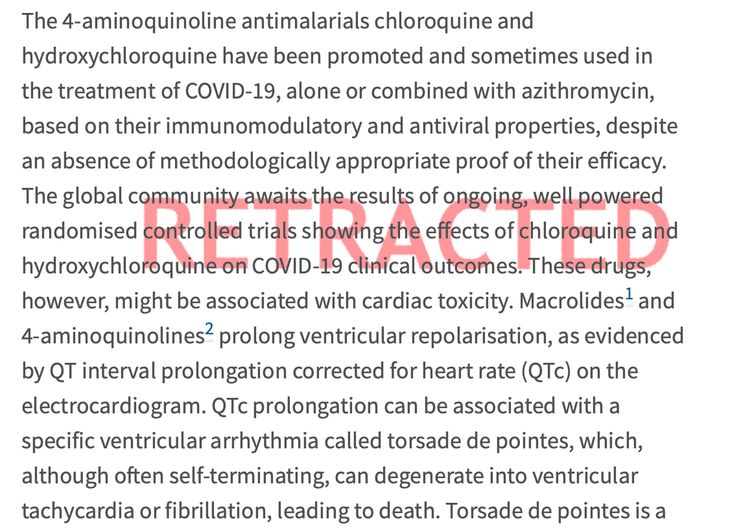 Funck-Brentano stands behind his work, “because hydroxychloroquine has serious side effects in some populations,” according to Retraction Watch.

The Lancet retraction reads in part:

A recent Lancet Article by Mandeep Mehra and colleagues, which reported adverse events associated with hydroxychloroquine or chloroquine treatment in patients with COVID-19, has been retracted by three of the authors, along with our linked Comment that provided a commentary on the Article and its findings, because the veracity of the data underlying this observational study could not be assured by the study authors.

“Hydroxychloroquine is like a religion for some people,” Funck-Brentano had said.

And yet, if HCQ’s side effects are limited to a small subset of the population, and more recent studies have shown it might be beneficial treating the broader population for COVID-19, it makes you wonder who the religious nuts really are.

Meanwhile, HCQ is apparently so safe to use that doctors are urging the FDA to make it available over the counter.

Sad to say, but there might be a “pull the ladder up behind you” angle to the Democrat-Media Complex’s anti-HCQ hysteria.

When the coronavirus first broke out in this country, apparently our betters indulged in a little white lie about the efficacy of mask-wearing against COVID-19. We were originally told they weren’t needed by none other than Dr. Fauci himself (and many others) back in March. Was that to help make sure hoarders wouldn’t leave them without masks?

Then we were told that the HCQ was ineffective. Was that to make sure that the “right” people would have ready access to drugs they told us either didn’t work or were actually dangerous?

I’m no conspiracy theorist, but today’s news does make one wonder.

More Than Just COVID-19: Risk-Tolerant America vs. Zero-Risk America — Will One Ruin the Other?